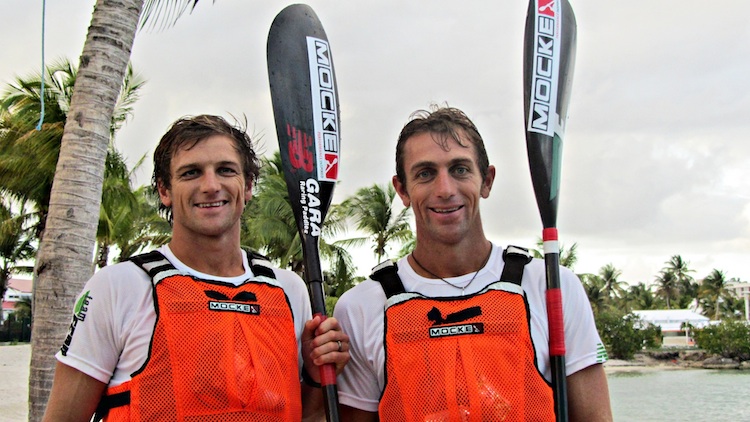 Dawid Mocke today successfully defended his Defis Kayak title in the French Caribbean.  The Defis Kayak, now in its fourth year and where victory has yet to elude Mocke, is a classic 26km channel crossing between the islands of Desirade and Grand Terre in the Guadeloupe Archipelago.  It is typified by big open ocean seas that require advanced surfski paddling skills.

Joining Dawid in the Caribbean this year was younger brother Jasper travelling to the Caribbean for the first time.  Jasper took an early lead in the race to win the €200 Hotspot prize soon after start.  Jasper, a previous National Surf Lifesaving Team Captain, used his masterful skills in the breaking surf to gain a lead through the reef pass at Desirade Island.  This gave him an early lead in the race and put him in a strong position at the start of the channel crossing.

A critical feature of the Defis Kayak race is a paddler’s approach to the “Pointe des Chateaux”, a rugged headland midway through the race.  Paddling from second position, Dawid made a tactical decision, mostly out his experience on this course, to take a wider line to the point.  Thus the two brothers were locked in a fierce battle to Point des Chateaux.  As they approached the Point it was Dawid’s line that gave him a slight advantage and one that he didn’t let up until the finish.  Jasper maintained his now second position and finished a good few minutes ahead of third placed French Champion, Benoit le Roux.

“This was definitely the hardest of the four I have won so far” said Dawid.  “The combination of mild wind, intense heat and humidity, and my brother’s tough racing made this a paddle of attrition.”

Jasper said about his race: “I definitely had my sights set on winning the Hotspot as this also is an advantage early in the race.  I then followed the Desirade coast for the first part of the downwind leg as I thought this would be quicker.   I’ll have to come back next year and try again.”

Conditions weren’t nearly as good for the race as they were in the pair’s preparation in the week preceding the event adding to the intensity of the race.

Also competing at the Defis Kayak were competitors from France, the Netherlands, Germany, the U.S.A, Brazil, St. Maarten and Martinique.

The Defis Kayak forms part of the Surfski World Series in which Dawid is the defending Champion.  Jasper finished off the 2012 series in second place and currently leads the 2013 World Series after victory in Australia earlier this year.

The pair now travels to Alicante in Spain to compete in the Eurochallenge Surfski event, currently the biggest surfski race in Europe.

Dawid had my attention from beginning to end. Such a great storyteller and truly inspirational!